I started riding as a young girl of seven years old. The type of riding I learned was dressage. I did so from a German cavalry officer who emigrated to the United States to escape the Hitler juggernaut. From there I studied with Erich Bubbel who was head of our Olympic Team at the time. I quit riding altogether as a teenager to pursue college and my professional life. But behind that pursuit was a deep-seated lack of self-esteem that pulled me away from the horse; maybe I really wasn’t as good at riding him as I longed to be. 27 years later I remember looking out a window at Lockheed Martin in Sunnyvale, California wishing I was riding horses again.

Around the same time I got a Divine call to “Go back to the horse.”  Truly; that’s exactly the way it happened – – a command in my mind. Being a devoted Christian, I heeded the call and reentered the equine arena through the sport of endurance racing. I had been an endurance athlete — marathon, triathlon — up to this point and was attracted to endurance horse racing as a sport. I recognized I could combine my experience in distance events with my love for horses.  An endurance race is a timed event over all sorts of terrain — water, hills, ditches, rocks, you name it.  My Arabian horse CF Drumsong (Aspen) turned out to be very good at this, winning our 25-mile races, and achieving top ten and best condition in 50-milers. My confidence as a rider and horsewoman was coming back. At the same time, I remembered the importance of my early dressage training as a communication vehicle to develop harmony between horse and rider. I started taking dressage lessons again on Aspen.

To fast forward a bit, I eventually ended up at my parent’s ranch in Acton, California, got married, and started competing in dressage. I also learned to jump. I had some wonderful horses during this time,  including my warmbloods Huntington and Mahogany and my thoroughbred Spectacular Leap. I managed to win a couple of championships and high points which rounded out my confidence as a decent rider.

When my beloved Huntington developed chronic lameness and could no longer compete, I purchased my wonderful PRE stallion Soñador.  I was confident I could continue my horsemanship career on this horse. I admired the PRE as a breed for his versatility and agility, and it was through the breed that I became acquainted with the sport of working equitation. Working equitation combines dressage with an obstacle course and speed phase. In so doing, it  puts dressage to work in areas outside the performance arena. This was captivating to me. A trip to Spain also showed me how dressage was applied to the doma vaquera work of the Spanish cowboy. I was on my way to seeing how dressage could be applied to other equestrian pursuits while preserving its classical intent.

When my husband passed away in 2017, I had another challenge to my confidence as a horsewoman and rider. Ed was the anchor in my life whose support gave me the courage to venture beyond what I thought I was capable of. Now that anchor was gone. I had lost my moorings.  An outward manifestation of this was my sudden inability to get my stallion into a right lead canter. Yes, I was older and my body had changed. But something else was going on. I was heartbroken over Ed’s passing, and it effected everything I did. I am clear now that my work with Soñador has been  my opportunity to regain that which was lost. 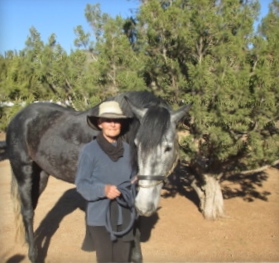 WHY I WANT TO HELP OTHERS INTERESTED IN DRESSAGE

It was originally developed out of centuries of preparation for battle on horseback, becoming a training protocol to develop horse and rider for mounted combat. In the process, horse and rider learned to work as a unit with the horse responding to the slightest communication from the rider. So refined was the process that the rider could think his request and the horse would respond.  Indeed, the survival of both parties would depend on their ability to work together in exquisite harmony. But problems crept in over the years in our zeal to turn dressage into a judged event in the show arena. Dressage is no longer just a training discipline, or means to an end, but an end in itself. So there are now dressage horses who specialize in dressage as a sport. This has created its own dilemmas.

I am interested in working with others who just want to be good riders and horse people. Maybe you too, like me, have felt you  have lost something during your life’s trajectory and seek to reconnect via your work with your horse and classical riding. If that’s the case, this website is for you as well as those of you who are interested in preserving dressage as a classical training discipline. Problems and questions will inevitably emerge, and I seek to help the equestrian public work through and solve those problems. What do you do, for example, if you don’t have a trainer? How do you proceed? What if you’re past your riding prime, like myself (73) but wish to continue to improve your horsemanship and dressage ability?

THE GOAL OF THIS SITE

Whether you are doing dressage in a western saddle, jumping, or competing in working equitation, I seek to explore and apply classical dressage principles to your riding discipline. This website will pursue the application of such principles no matter one’s riding sport and identify the dressage competences which pertain.

If you ever need a hand or have any questions, feel free to leave them below and I will be more than happy to help you out.