When I ask myself “How Can I Avoid Getting Sucked into the Dressage Hype,” I’m wondering how I can avoid getting lured into what some authority or authorities dictate I should be doing on my horse or how I should be performing just because it’s the current fad. I’m not exactly sure how such a requirement gets transmitted or how one can avoid getting sucked into it. It may come through the ether, spread by some mysterious word of mouth so that pretty soon one finds oneself blindly adhering to it. And it may not even be good for you or your horse.

I have found myself in just such a predicament  recently as I’ve been trying to get my P.R.E. stallion ready for what the breeding community calls “revision”; that is, getting him approved as a breeding stallion. Normally, such an inspection is done when stallions are just three years old. My stallion is now eight. There’s a long story attached to why I’m having him revised so late in the game. But that’s for another article.

All told, its a simple process. Judges from Spain fly out to California to assess the horse’s conformation by eyeballing him and  taking measurements to see if he meets the physical criteria for the breed. Then the young stallion is led out by his handler so the judge can observe the horse’s movement. The movement must be lively, expressive, and energetic. The horse must show even rhythm in his gaits and a desire to go forward. Here’s where the fantasy comes in. What does all this exactly mean? What does it look like exactly for a young untrained horse or a mature horse, for that matter? How do you train him to do this stuff?
During the last revision I observed, the horse was led out in a straight line at the walk. Then he was trotted in a circle around the handler. The handler finally ran with him down the long side in a straight line so the judge could observe a more extended trot. The judge did not look at the canter. This says something in itself. Why not?

At least this is what I observed in the one revision I went to last year in Agoura, California. I’ve also observed championship classes where horses are assessed against each other to pick “best of show” and the standard for the breed. I saw a few of these in Spain.

Here’s the problem:  My website in large part argues that there is a tendency of dressage to showcase the falshy mover rather than adhering to its classical heritage as a training vehicle for the obedient riding horse. See my article  on this subject.   In turn, processes which prepare the horse for dressage competition  are being corrupted by the same tendency. Take the revision process for Spanish breeding stallions which I described briefly above. I fear this process may be  succumbing to the tendency towards the flashy mover who was bred that way, not trained in the manner of dressage. The flashy mover works from the front end, not the back, which is totally against the tenets of classical dressage. Such a mover becomes  a “leg mover” not a “back mover,” according to German trainer and veterinarian Dr. Gerd Heuschmann (see his book Tug of War, 2007).

But it is not only the sport of dressage itself but the people in it individually who are yielding to the hype. I am one of those persons.  I am recognizing that I’m beginning to work my stallion towards the fantasy flashy leg mover at the expense of more basic solid training. I have been thinking this is what the judges want to see. I believe this is what they want to see because I’ve seen them reward it and because this is the message I’m getting through the ether. And I want this badly because my ego is wrapped up in it and also my money. But I don’t even believe in it.

I caught myself getting sucked into the vortex of such hype the other day when my young Hispanic trainer was working with my stallion in hand to encourage him forward in the trot. My stallion kept breaking into a canter which caused my trainer to have to jerk him around in a tight circle to “kill the canter” as he put it. This put tremendous strain on the joints and muscles. And low and behold, my stallion came up sore in the left hind leg at the end of the session.

But I encouraged all this as I yelled, “Good. That’s it,” when I saw the front end extend and rise to show elevation. Of course, it’s “eye candy,” as my trainer put it. But I had to ask myself, “What’s the hind end doing which supplies the pushing power for all this fire?” I wasn’t looking at the hind end. Like most aficionados in my sport, I got sucked into feasting my eyes on the front end because that’s where all the dazzle is.

I finally came to my senses and told my trainer to stop the exercise, that we would in the future only spend one half hour on such in-hand work a couple days a week for starters. My trainer explained that because we have been using only a rope halter and because my stallion is so big and powerful, he has to apply the geometry of a circle to slow the horse down and get him back to a trot from the canter. The horse would tend to break quite a lot from trot to canter because the canter is easier for him. We are trying to teach him to feel comfortable extending himself in the trot, which is what the judges want to see. 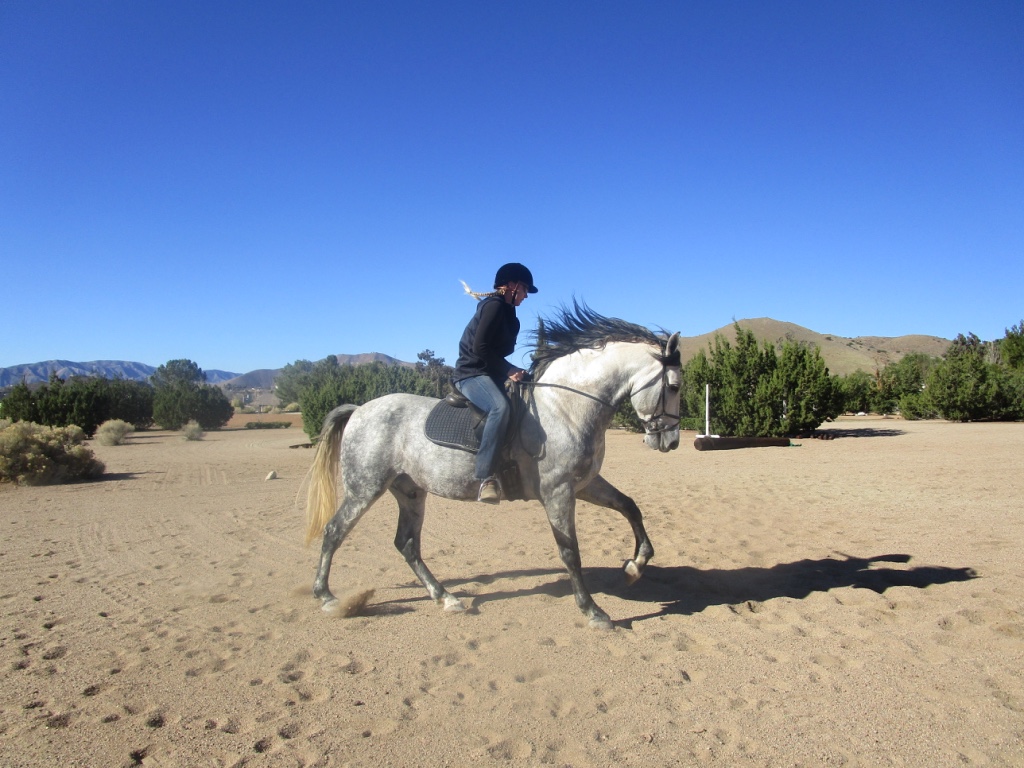 Soñador, the stallion described in this article. Jennifer Smith up.

Maybe next time we should use a stud chain or a Portuguese lunge cavesson to exact better and quicker obedience from the horse rather than having to jerk him into a circle, I thought. This  stresses the muscles and joints. Or how about teaching him to understand what we want? See Dave Johnston’s suggestion for a “strong trot transition exercise” below.

And here’s another point, this is not a three-year-old. This is a mature stallion who in many ways becomes much more difficult to handle on the ground in these exercises. My trainer to his credit realized this when he suggested  what we really need to work on right now with this horse is obedience.

Notice the picture to the right. This is what we’re after. It depicts a horse whose front and hind end are working in equal alignment; that is, the angles are pretty much the same for both the back and the front legs, and he’s working with expression. The horse looks like he’s showing a collected trot, which is a more advanced gait than what we need for the revision process. Nevertheless, the same concepts apply whether the horse is performing more advanced or elementary expression in the gaits.

My trainer and coach, Dave Johnston has suggested “a strong trot transition exercise” to achieve the desired expression.  Once warmed up, Dave advises going from working to strong trot and back to working repeatedly. He says that over time, the horse will understand the difference between the paces and the concept of not breaking to canter from a strong trot.

After a while when the stallion is solid in a strong trot, Dave suggests asking for short periods of a strong trot to a more lengthened trot. Don’t do too many transitions here, he says. Then later still ask for medium trots back to strong then working.What’s important is that the trots are specifically delineated – – – either working, strong, lengthened, or medium so that the horse balances himself in each pace and doesn’t revert to breaking into the canter.

I don’t know how to prevent getting sucked into the dressage hype. I only know at this point to be aware of it  and be ready to stop oneself  if you think you’re getting drawn in.

How do you, the reader, prevent yourself from getting sucked into the hype?

What exercises do you  suggest to get a stallion ready for stallion approval? Please put these and other suggestions in the comments below.

I’d love to hear from you.