A previous article on this website sought to nail down a theory of dressage that can be useful across disciplines to develop an excellent riding horse, one who is willing and able to perform his rider’s wishes. The basis for this theory is  Alois Podhajsky’s principles as outlined in his Complete Training of Horse and Rider (1967). My last article on the subject produced a diagram of Podhajsky’s principles, starting from the most basic to the more advanced. This article continues our discussion of theory by introducing the dressage training scale, or pyramid of training, which serves as a guide for dressage  throughout the world today.

Specifically how does this modern scale compare with the principles outlined by Podhajsky? Are there things missing? Of course, the reason for this whole exercise is to articulate a solid foundation for dressage practice, why we do what we do in a way that makes sense.

As Claire Lilley describes in her Scales of Training Workbook (2010), the training scale, or scales, is rooted in the traditions of the Spanish Riding School, in particular the teachings of the Austrian riding master Max von Weyrother, who was greatly influenced by the French master, de la Guérinière. Other influential horsemen include Gutav Steinbrecht (1808-1885), one of the great German trainers, who was fanatical about forming the outline of the horse in the right way. He was of the opinion that the exercises should

“…all follow one another in such a way that the preceding exercises always constitute a secure basis for the next one.”

The scales of training, or dressage training scale, were developed for the German cavalry school in Hanover and the rules were first laid down in 1912. They were set in their present form in the 1950s. (p.16)  The diagram below was obtained from the California Dressage Society (CDS). 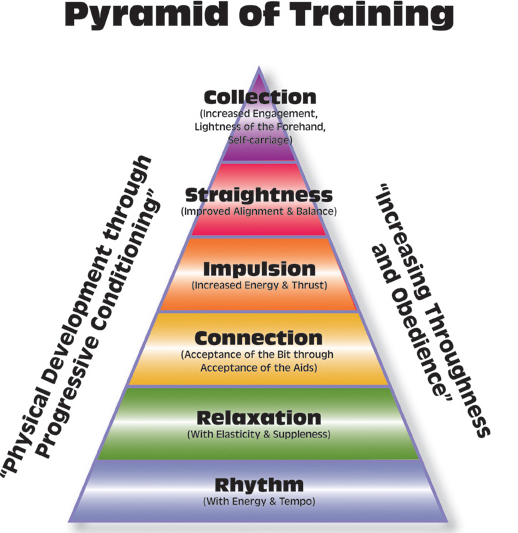 Starting from the bottom of the scale to the top, the following definitions apply: These are largely taken from Claire Lilley’s The Scales of Training Workbook.

“The scales work in a chronological sequence and are inter-related; they all relate to every stage of the horse’s training to some degree.” (p. 15)

Rhythm.  Rhythm is the regularity of the gait, rather like the ticking of a clock. Tempo, in turn, is the speed of the rhythm.

Relaxation. Relaxation is equated with elasticity and suppleness. The horse is loose. Suppleness, in turn, is an expression of relaxation. There is a looseness of mind and body and an absence of anxiety so that the horse gives his body over to the rider without tension. Tail carriage that is relaxed and swinging is an indication of relaxation and the result of proper contact.

Connection or Contact. Contact with the horse’s mouth is correct when the poll is at the highest point and the horse is neither leaning on nor above the bit. He is working into contact with the rider’s hand from back to front. The nuchal ligament, which supports the spine along its length, connects the poll to the tail. That is why we can say that tail carriage is an expression of proper contact.

Another way of thinking of contact, or connection, is support. But it’s not just support with the hands through the reins. The rider supports and communicates with the horse through her seat and legs as well as her balance.

Impulsion. Lilley defines impulsion in two ways: She says impulsion is ” the desire to go forwards” on the one hand while it is also hind leg energy and thrust on the other. She notes that “forwardness” is the precursor  and the ‘baby stage’ of impulsion. (p. 122) Impulsion, in turn, seems to be the more advanced result as the hind leg thrust against the ground pushes the horse forwards and upwards. The horse develops engagement as he tucks his loins and flexes the joints of the hind legs, elevating the forehand. (p.120).

Collection. Collection is the ability of the horse to take weight behind and to work with the poll as the highest point. Collection is a culmination of the the other scales: The gaits must be rhythmic; the horse must be supple or relaxed; he must work into soft contact without leaning on or going above the bit; he must be straight; his steps must show impulsion or thrust and have a springiness to them known as cadence. There are degrees of collection: Look in particular at the hind legs in the pictures below. 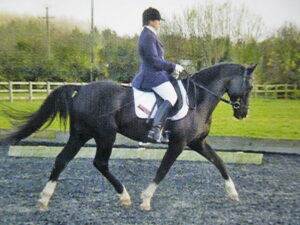 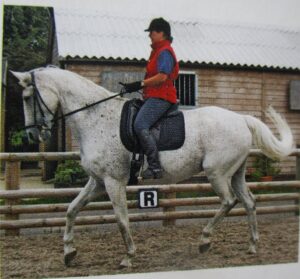 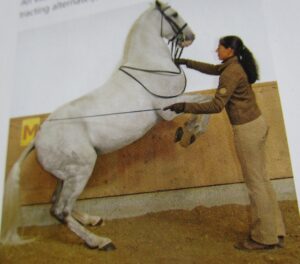 Highest Level of Collection; the Levade

What’s Wrong With This Picture

Why is “Forward” Subsumed Under Impulsion while “Straight” Isn’t Dealt With Until Later in the Scale?

The most fundamental principle in Podhajsky’s training approach is to “ride your horse forward and keep him straight.” The horse’s willingness to move ahead at the rider’s request is essential before anything else can be accomplished. Forward may thus be defined as the horse’s responsiveness to the leg. Yet in the modern training scale reviewed above, “forward” is subsumed within the principle of impulsion which is developed later in the horse’s training. Similarily, “straight” does not come into the picture until just before impulsion. It is amazing to me that two sets of principles both having their nexus in the Spanish Riding School could be so far apart on these fundamentals.

I have asked myself if the lack of emphasis on “forward” in the modern dressage training scale is the reason why I have started to see rider’s banging their legs against their horse’s sides to get the required energy sought in dressage exercises especially at the trot. This suggests to me that the horse has not been prepared mentally for the level of energy required in the work, putting an undo burden on the rider to keep the energy going in more advanced tests.

Shouldn’t Relaxation Be the First Thing We’re Striving For?

In the modern training scale or pyramid of training, relaxation comes after “rhythm.” I would argue, on the other hand, that relaxation is  a prerequisite  so that the other principles can have effect.  Podhajsky says the horse should be relaxed both mentally and physically,  but he doesn’t dwell on the concept in any depth as though this was a given for horses at the Spanish Riding School. I suspect this is because trainers took their time with the horses at the School. In fact, Podhajsky does emphasize the importance of taking one’s time in the training of the horse. He says in The Complete Training of Horse and Rider,

“When training his horse, the rider must repeat over and over again, ‘I have time.’ It takes time, a great deal of it, for a horse to develop and to understand what is required of him.” (p.119)

Today we must pay special attention to the important principle of relaxation because of the modern rush to get horses trained and “out the door” so to speak. Relaxation is especially important to allow the horse to develop the understanding he needs to perform successfully for the rider without force.

Suppleness Seems to be  Getting Confused with Relaxation

Of course, the horse has to be relaxed as the first order of business in order to be supple. But he can be relaxed and still have that nagging “stiff side.” It is the job of dressage to enable him to be both laterally and longitudinally supple or flexible. The reader will remember that by “longitudinal supple,” is meant the horse’s increased ability to bend the three joints of his hind legs.

What About Head Position?

Podhajsky’s principles specifically deal with head position as both something the rider works on in training and as an indicator of what good training is. It is curious to me that it is no where to be found in the modern training scale reviewed in this article. Yet the most egregious abuses of dressage training occur through a distortion of head position in the horse.  This is largely the subject of Dr. Gerd Heuschmann’s Tug of War; Classical versus ‘Modern’ Dressage (2007) under the moniker “Rollkur.” He explains that many riders are under the faulty impression that the ‘the head must be down.” Perhaps they think that this is how the back will come up and the legs engage underneath. Nothing could be further from the truth.  Below are pictures which compare head position in two advanced horses. 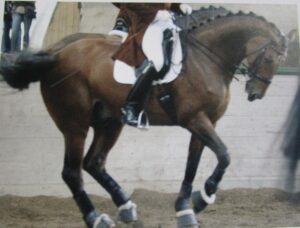 A faulty piaffe with the supporting front leg pushed under the body, the horse curled up behind the vertical, the head-neck axis too deep and the horse not in front of the rider’s aids

Podhajsky states in The Complete Training of Horse and Rider that

“The object of training will be to correct the balance by making the hindquarters carry a greater proportion of the weight and to relieve the forehand by transferring the weight from the shoulders to the quarters. ” (p. 41)

He goes on to say, however,  that rather than carrying the weight, the hind legs will often push it, a fault which must be corrected through training.

Balance furthermore is the basic requirement for pure and impulsive paces; that it is the rider’s art to balance the centers of gravity of the horse and rider so that the former is not disturbed in his movements.(p.42)

Perhaps in the Pyramid of Training above, it is assumed that balance will be worked on as we move up the levels of training until “voila” the desired balance is achieved through collection. The reader will note that in my discussion of collection just as there are levels of collection so too does the balance shift to the quarters when that collection becomes more advanced, culminating in the levade.

This is my opinion. Let’s review what Podhajsky says about this. He doesn’t single out “rhythm” specifically as a  principle but rather talks about the sequence of steps in the different paces or gaits. This sequence of footfalls  for walk, trot, and canter must be maintained throughout the training. So essentially as one is proceeding with the horse’s woek, s/he would have his/her ear on the rhythm to ensure that the horse isn’t suddenly engaged in a four-beat canter, a lateralized walk, or a disruption of rhythm because of muscle weakness or lameness.

Podhajsky does emphasize that one of the main objects of training is to be able to maintain a regular tempo.(p.31) Tempo, as the reader will recall, is the speed of the rhythm. So the challenge for the rider is to ensure that the horse’s steps aren’t suddenly quickening then slowing then quickening again ——unless required by the particular movement in question.

I’ve critiqued the dressage training scale; now I’d love to hear you, the reader, critique me. What’s wrong with the picture I’ve painted? Or do you agree with me? Please leave your comments below or any questions this article has raised for you.