THE DRESSAGE PRINCIPLES OF CLASSICAL THEORY INFORM MY OWN DRESSAGE RIDING
I am alone in my dressage work now with my stallion, and I’m wondering what all the years of training and competition have taught me. Surely I’m capable of working through the presenting issues with my horse without having someone yelling in my ear all the time.
However, it is said that dressage is a coached sport. This is true at least  insofar as one has her eye on the competition arena.  Dressage in this venue is extremely precise, and one needs eyes on the ground to identify problems or good points that the rider may miss. But beyond the competition part, I’m convinced that an educated rider is capable of working on her own for at least some of the time.

DRESSAGE PRINCIPLES OF CLASSICAL THEORY INFORM MY WORK WITH MY P.R.E. STUD HORSE; THEY HELP CREATE A SAFE STALLION

But in the Spanish Riding School of Vienna, that’s all they ride is stallions, all beautifully behaved as they perform their movements and drills. During a recent trip to Spain, I saw stallions behaving obediently in a circus of mares, geldings, baby strollers, tents, grandmothers and whatnot all mixed together during the annual trade fair for the Spanish horse in Seville, Spain called SICAB for short.  But in this country we are told,

DRESSAGE PRINCIPLES OF CLASSICAL THEORY INFORM ANSWERS TO MY OWN QUESTIONS ABOUT MODERN DRESSAGE
My current study of Alois Podhajsky has as its purpose the recalling of experiences of the masters and applying them to the approach with which I was trained as a little girl and use now. Here are some questions which arise in this process: What are the principles and exercises which express those principles that can help achieve the forward, balance, straight, collection, impulsion I spoke of in my earlier article? How can we use these principles to diagnose problems  and choose the right exercises to help us work through those problems?

I told her I followed my heart, not convention; that I can train the necessary warmblood trot with suspension on him and that P.R.E.’s are known for their ability to collect. I had accomplished work at the lower levels of dressage and bought my P.R.E. to help me with the upper levels where collection becomes more of a requirement. Another friend told me,

Just the other day my trainer, Joel Sheridan, and I trailered my stallion over to a neighbor’s ranch to expose him to other horses and let him see some new sights. While Joel was riding him, he began to demonstrate the kind of wonderful trot that is devoid of fad and bias but rather showed the classical pure gait that Podhajsky would be proud of. The trot was gorgeous and energetic, thrusting from behind with the forelegs reaching out in equal symmetry with the hind legs. It was beautiful, a true dressage competition 10 according to my estimation. But it was not a passage-like trot of the warmblood, and that’s the point. 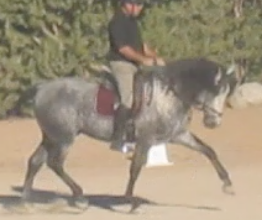 But there are also some problems not the least of which is a passage-like trot I mentioned above. As we will see when I get into a discussion of Podhajsky, the emphasis must be on purity of the gaits. A trot must be a trot, a passage a passage and so on. There must not be any cross-over so that the onlooker is confused by what s/he is looking at.

“Don’t dressage horses have some other job that they need dressage for to help them do their primary job better?”